Michelle Christensen, Acura’s first female exterior designer, styled the company’s 2016 NSX, which debuted in 2015 at the North American International Auto Show in Detroit. Christensen had designed prom dresses in high school. She didn’t even know car design was a career until her second year of community college in Cupertino, California. 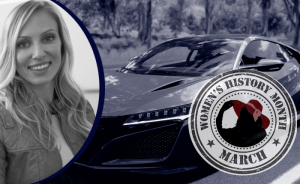 Christensen grew up in San Jose, California, playing basketball, sketching ideas for prom dresses and helping her father restore classic cars in the garage. At De Anza College, a community college in nearby Cupertino, she started sketching cars. That led her to the Art Center College of Design in Pasadena. Dave Marek, an Art Center instructor who also happened to be global creative director for Acura design, hired Christensen right out of school in 2005.

Christensen proved herself right away when a concept she developed was selected to become the Acura ZDX crossover. Her work eventually caught the eye of General Motors, and she was hired away in 2010, but just 11 months later she was back at Honda, speeding ahead on the NSX project.